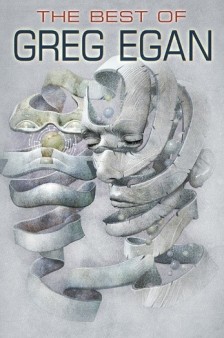 “The wormhole makes tangible the most basic truths of existence. You cannot see the future. You cannot change the past. All of life consists of running into darkness. This is why I’m here.”

– Greg Egan, “Into Darkness” in The Best of Greg Egan

Science fiction fans will be happy to note that there is no such thing as “the best.” This is the appropriate irony of this collection, as it unwittingly, clumsily, and carefully challenges the idea of an idea of an idea into infinity and beyond any foreseeable, preventable, diagnosable end. Time, existentialism, number theory, artificial intelligence, naturalism, simulated reality, metaphysics, human consciousness, religion (consistently battered, bruised, and bullied into a biased, likeable unlikelihood), quantum mechanics, and the existence of frontiers without the capability of definition, except through jerry-rigged laws and yet-to-be-believed theories in their place and paces, make up these thirty years of hard science fiction. Between the seasoned fact-checkers and mathematical zealots to the lighthearted space opera goers and speculative enthusiasts, there stands a haughty anomalist who comes from the nineteen-nineties (it would be criminal and oxymoronic to call him an Australian science fiction writer at this point) Greg Egan who has a hunch for what his best (so far) is, and what a hunchback he has (or not, since keeping up appearances is not his thing, and neither is Google).

From Subterranean Press, The Best of Greg Egan collects cybernetic think pieces with remarkable haptic situations. His depth of field is diverse and perverse, foreboding and familiar, experimental yet elastic. Although these stories manage a clarity that confounds itself as it grows more curious, a lot is still to be questioned despite the seeming disconnects threaded and plot holes filled. Characters are painfully aware and disturbingly made unaware of their second class citizenship and the capitalist and commercialist gains forced onto them in stories like “Learning to Be Me” and “Closer.” The willful ignorance and digital dire straits following the forgone autonomy for transhumanist robot bodies and plastic replicas, the literal turning over of the human brain and body to technology is all cause for concern, but never in time to admit the mindless reliance placed on these drawn-and-quartered alternatives. Before any digital dust kicks up, there are some novella-length companion pieces that bid for the noninvasive engineering of the human spirit. “Oracle” and “Singleton” share a skewed timeline between worlds not too foreign from one another that both raise the question posed by Alan Turing of whether or not a computer can think. That and if a computer can impersonate human behavior, social cues, and desires that may or may not be able to alter the visible and invisible universe, like in transcendental and nature-bending tales, “Unstable Orbits in the Space of Lies” and “Chaff” or “Luminous” and “Dark Integers.”

A few one-off stories also hold their own merit in this short story collection, bringing a singular, personal lens to the unnatural made natural. From a man’s brain being kept alive via blood from his wife’s uterine walls to the cultish outbreak of a dermatological disease worse than leprosy that burns the underside of the entire body’s skin, to the acts of faith put to work for an ocean-cultured boy placed on dry land and a chemical engineer and Iranian, Muslim girl inventing a breakthrough her country never knew it could have, it is etymologically more than possible Egan is a lionized substrate of a tin man made human rather the opposite way around. The guesswork is cleaned and polished yet still gets its nose gritted by the grindstone. The outlandishly unorthodox remedies to change the fallible into the infallible, the overwhelming indecision and limitations of physicality are these stories bread and butter or quarks and neutrinos. Whether he be man, machine, both, or none of the above, readers can be certain, and linguists can determine, that Egan is not without the remnant of a heart.

“I suppose there’s a pleasure in that wistfulness too–in remembering the way something was and holding tight to what will also one day be a memory.”                     – Lauren Grodstein, “Around the Table” from Apple, Tree

Childhood is reverse parenting. Growing up takes on the responsibility of becoming, which is found in the adults who rear the child. Growing down however leads one to becoming what is else, what is more, what is unexpected. Apple, Tree: Writers on Their Parents by Lise Funderburg explores the adolescent trappings and developments of its contributors, starting from the root and out to the branch where gravity took a hold of them and plotted them in front of the parental gaze. Far pass Freudian theory, this collection on child rearing and family dynamics informs the writer’s life as something both undesirable and desirable as bath time. The dichotomous relationship of the apple (child) and the tree (parent) can be felt first in the bifurcation by the comma in the book’s title. Difference within or between family members is not always apparent, but as the tree holds the apple, the parent holds onto the child, until the child notices just how far out of reach the parent is and vice versa. The proverbial fall experienced by these collected writers attempts to find out if this transition into adulthood should be a rude awakening or a heedful reminder.

A running theme in Apple, Tree is the child who believes to possess large philosophies while the parents have small ones. It is not until they have aged that they realize it is the opposite. In some cases, these philosophies are challenged. Reading Shukree Hassan Tilghman’s piece, “Lies My Parents (Never But Maybe) Should’ve Told Me,” one finds the impossibly delicate veil that lies between humoring a white lie and the, sometimes, harrowing truth at the end of its punchline. In Avi Steinberg’s “Household Idols” and Donna Masini’s “What We Keep,” stories of heirlooms are rummaged for in what would be the unmistakable home of an accidental, sometimes purposeful, hoarder. Some authors here have struggled with identifying with their parents, sharing similar appearance (“Sisters” by Ann Patchett) or judgment (“One Man’s Poison” by Kyoko Mori). A chance to pervade rather than drown in the genetic pool still exists yet. From her story, “Unlived Lives,” Laura Miller writes that parents “can be the most familiar people in the world and total strangers; they have a dark side like the moon, that’s invisible to us as long as we remain locked in the fixed orbit of the parent-child bond” (87). Dissidence and denial delineates and loosely defines the duality a parent and child share. Daniel Mendelsohn’s mother has a neat-freak personality, for example, causing her to chase the life she could have had by keeping her house a spotless sheen in the hopes that time lost will return to her. It is behaviors like this, the need to meet perfection, that leave both the parent and child less than imperfect.

Funderburg mentions in her introduction that Apple, Tree is an exploration of “the space between the apple and the tree…” She also quotes John Freedman as saying that this exploration of family is a “love [that] is in clarity, not sentiment” (Funderburg xii). Perhaps there is no one answer to all the unanswered questions children may have for their parents. Parents too, may not know or have all the answers themselves until their children come up with better questions. The theory that the apple does not fall from the tree must have some truth in it. Maybe the answers present themselves only in practice? Here is one more attempt to answer a proverb with another: when the apple is ripe, it will fall.